I am reworking my little story book, written and illustrated in Prague. 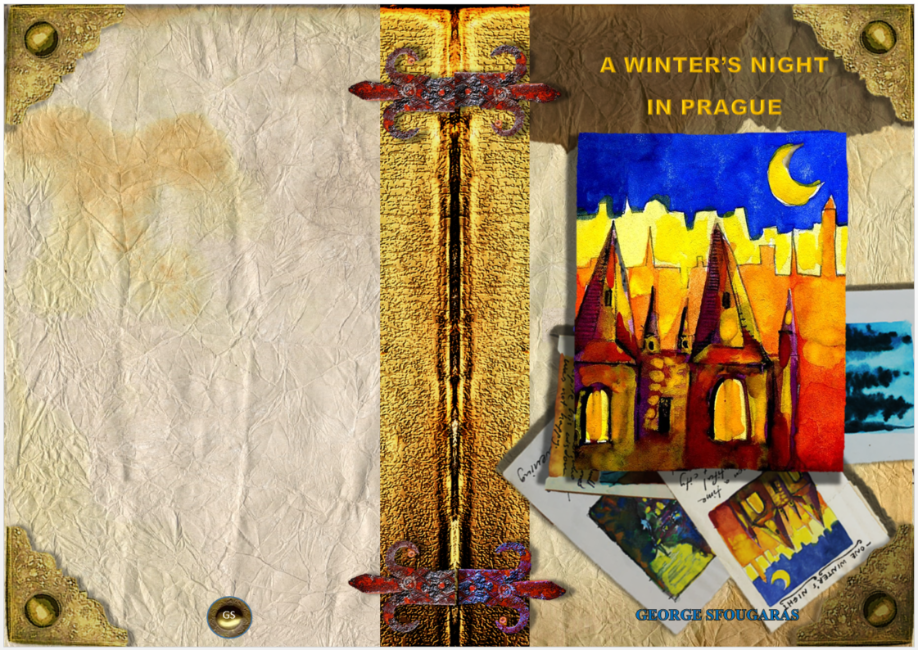 Duringthe hot and humid summer of 2002, I found myself in Prague, for a rare few days away, without my daughters.

The days passed slowly and the nights in the hotel even more so. The thick woollen blankets and itchy sheets meant that most of the nights were spent on the tiny balcony overlooking the empty streets and the gothic rooftops. It was during the stifling hot nights that the little book was written and illustrated.

On returning to Britain I made a booklet with just one of the stories, which I published myself. Now, sixteen years later, I find myself drawn back to this simple little collection of stories, which I said to myself I was writing for my children.  In retrospect, I was writing them for myself and hoping that the girls would enjoy them too. It was the act of a parent, who filled with guilt, had to prove himself worthy of this childcare-free interlude.

The whole thing (it is only a few pages) was written by hand and illustrated using a travelling set of inexpensive watercolours and some inks. Interestingly, the sketchbook purchased from the little bookshop that was situated in the old Jewish quarter next to the Old New Synagogue.

I did not know it back then, that my work would one day explore the Jewish history of my place of birth, Crete; and yet, that day in the Synagogue was the part of the trip that stayed with me.

As the taxi drove me to the airport. A light rain broke the long hot spell. It went on to rain from weeks, drowning much of the old town under water.

I will be in conversation with Theo Miller at the Leicester Print Workshop on the 5th December from 5.30 till 7.00 pm, talking about my art practice. Everyone is welcome.

Three of my recent printed works have been selected to be part of the Leicester Open selective exhibition, including one of the few remaining (and beautifully oak framed by Cank Street) 'Lazarus' prints (shown below). Exhibition will run through from December the 15th until the 2nd of February 2019.

The annual Open exhibition is the city's premier showcase for visual art within the city, celebrating the rich and diverse skills of our local artists. 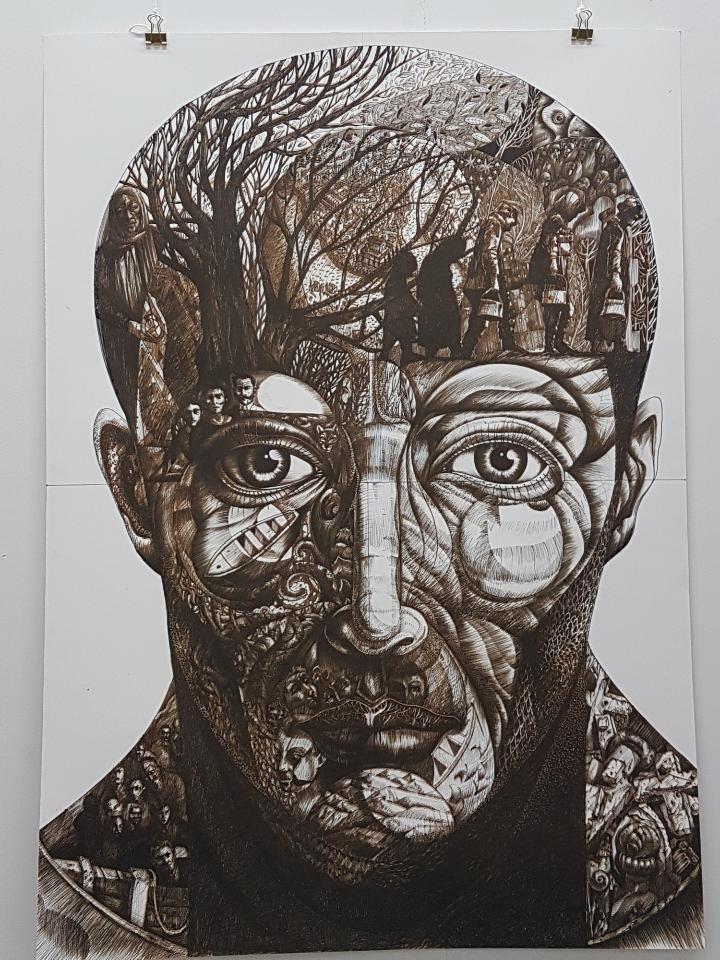 You can see three of my large portraits at the New Walk Museum Leicester Society of Artists Exhibition from November 8th to December 8th 2018. Below: 'Trabzon'Acrylic on Canvas. 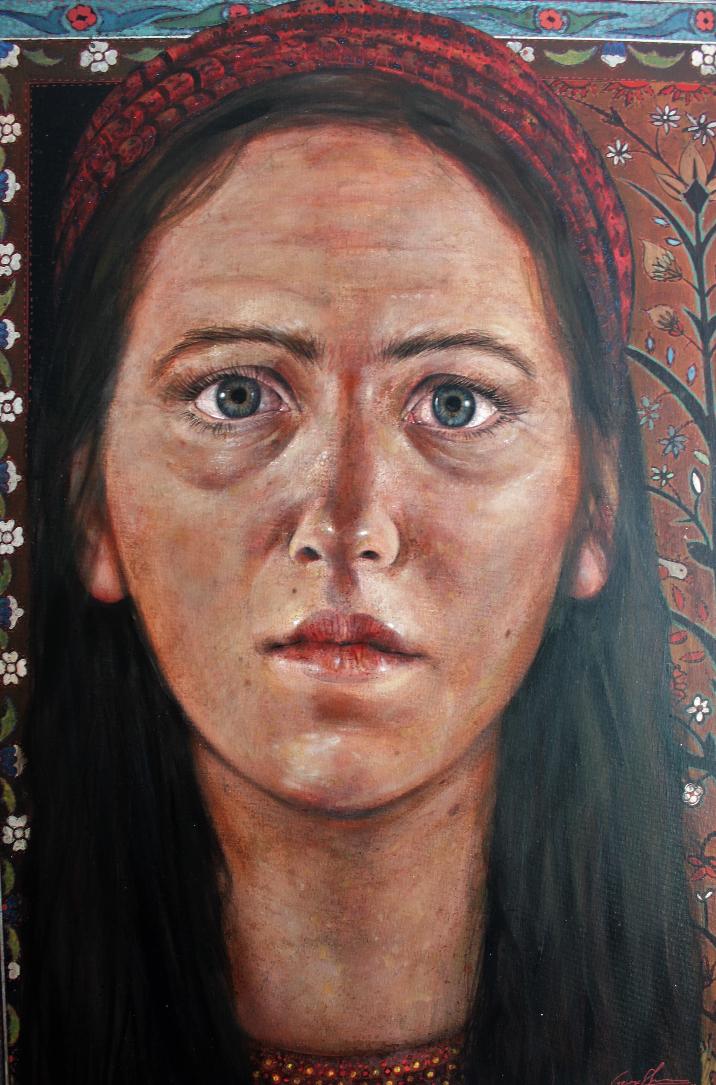 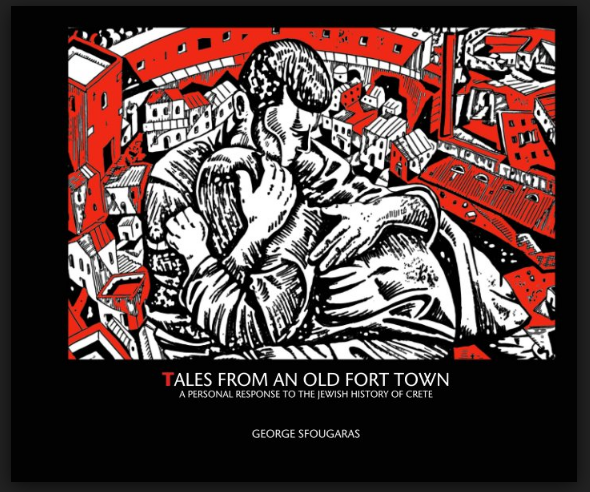 A PERSONAL RESPONSE TO THE JEWISH HISTORY OF CRETE THROUGH ART

(The Old Fort Town referred to is my birthplace of Herakleion, Crete).

As I prepare for the visit to Crete in October 2018 and the exhibition of prints at Etz Hayyim Synagogue in Chania on the 24th, I am grateful that the little book has been augmented by input from John the editor and supported by the Synagogue director Anja.  I was fortunate to be introduced to the talented poet Shelley Tracey, whose poems now accompany the illustrations, adding a new powerful aspect to the book.

The illustrations from the book were used as a backdrop to the Holocaust teacher training event in May in Crete, in memory of  Nikos Stavroulakis, who was the driving force behind the Synagogue's restoration. As an addendum to the exhibition of the nine colour Giclee prints, I produced 5 editions of 10 prints, using five of the original drawings that were used to create the illustrations for the book.  These are printed in archival ink of Heritage paper and have been posted to Crete.

All the illustrations were originally completed as monochrome pen and ink designs for screen prints. They are an important part of my on-going work into the many histories of the island of Crete. The images are shown here with the addition of colour to be used as illustrations for the book.  Later on, they are shown being made into monochrome limited edition prints.

The book is my personal response to the history of the Greek Jewish community of Crete; a community which played an important part in the life of the island but which, through ignorance, racism, and greed, has now all-but-disappeared.

Similarly, Crete’s Arab past has all but been buried.  That past is examined in my illustrated book ‘The Forgotten Conquerors’ which I also hope to see published soon.

Read more on my blog

It was my honour to be back in Heraklion, Crete in July 2018 and contribute to the Arts Festival with this mural. This island has always been at the crossroads of three continents. The little boats with the leaf sails and the new seeds arrive on the waves of Crete's blue-black hair. On the other side, beautiful flowers spring from newly settled homes. We are one. #peace #love 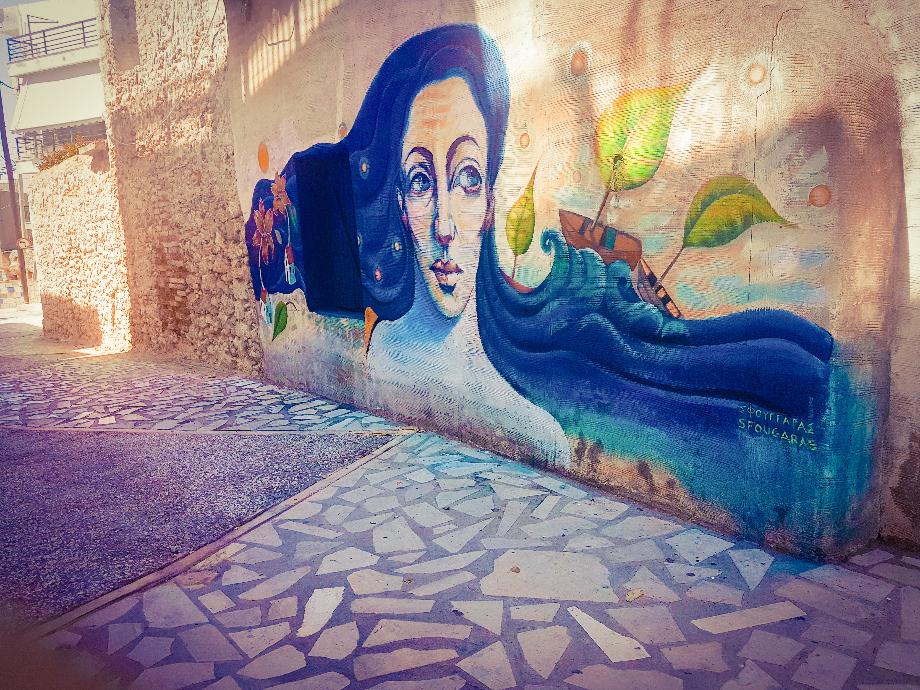 'Yiayia' (Grandmother), is a small painting in acrylics on canvas completed in December 2018 and  measuring 50 x 40 cm approximately. 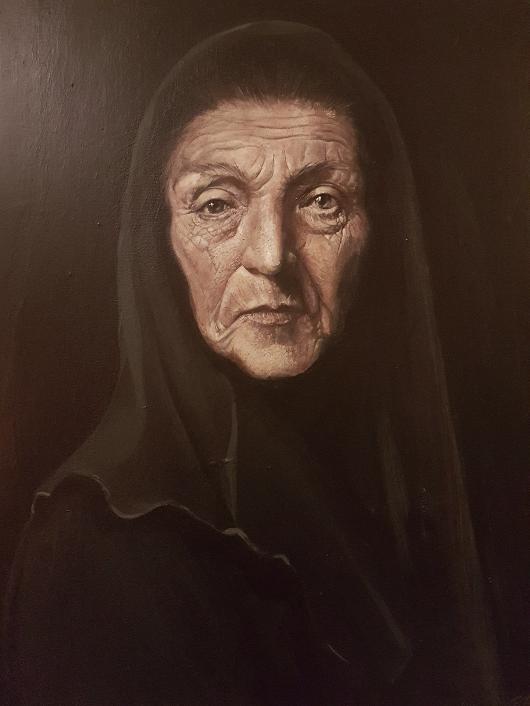 JOURNEYS FROM HOME RUGBY MUSEUM. THREE OF MY PRINTS WILL BE SHOWN ALONGSIDE THE IMPORTANT ARCHIVAL COLLECTION ON MIGRATIONAT RUGBY MUSEUM. 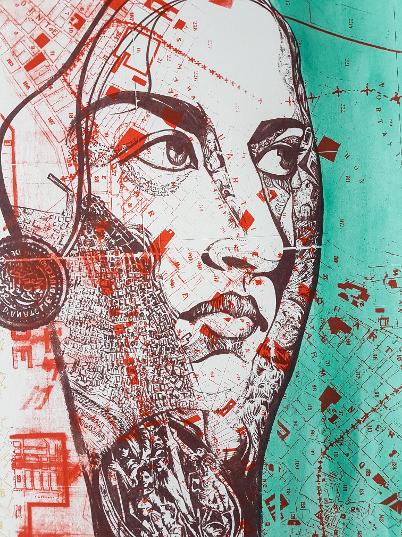 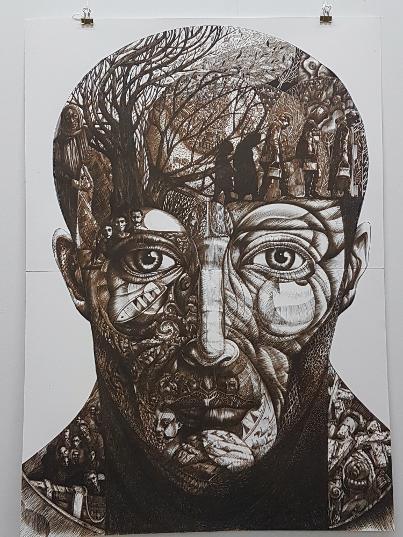 AN EXHIBITION OF MY PRINTS AT ETZ HAYIM SYNAGOGUE, CHANIA, CRETE, IN THE CONTEXT OF A TRAINING EVENT FOR GREEK EDUCATORS. 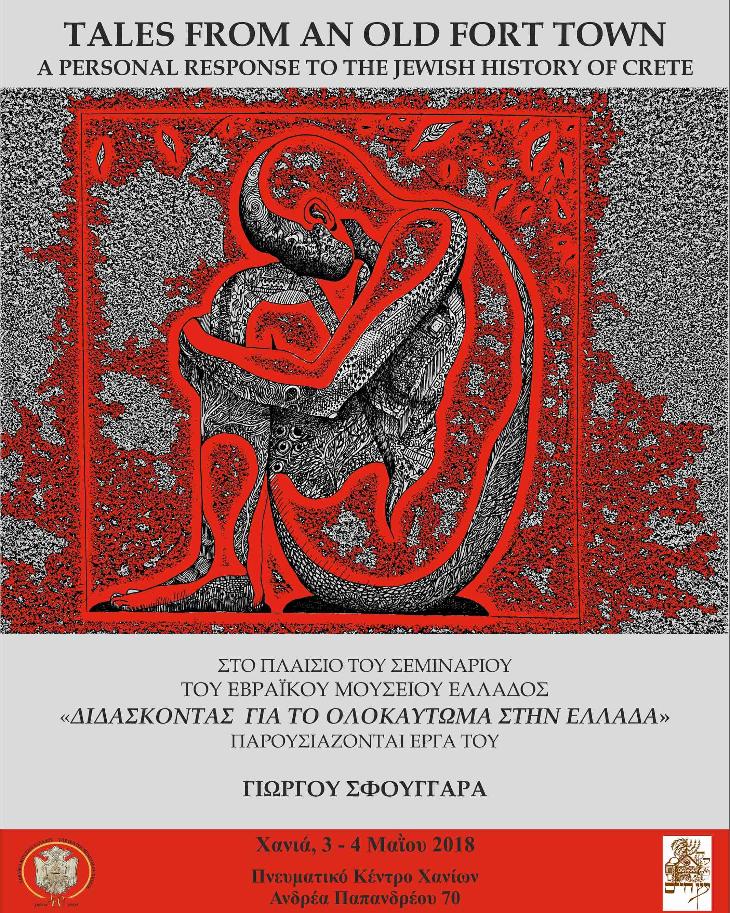 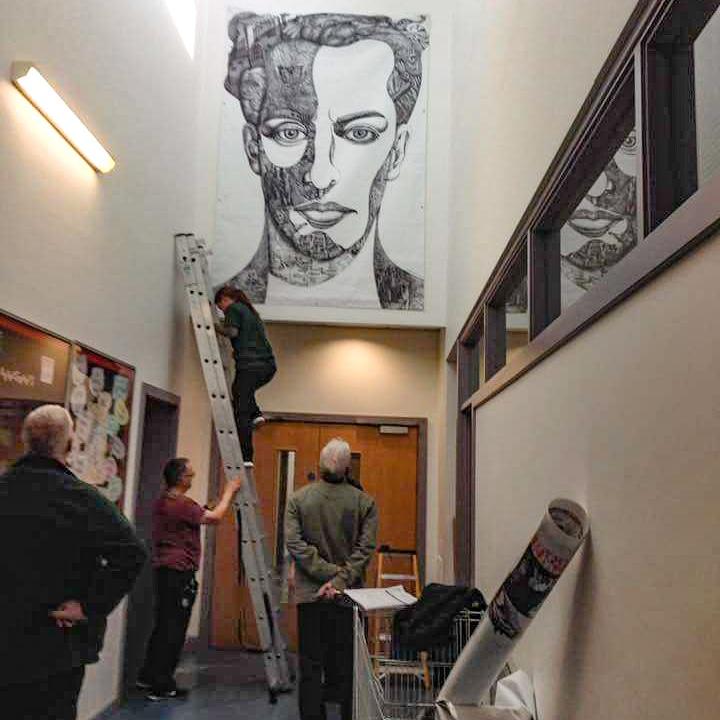 WORK SELECTED AS PART OF THE ARCHIPELAGO INSTALLATION, VALLETTA, MALTA.

'MY PERSONAL MAP OF HERAKLION'. 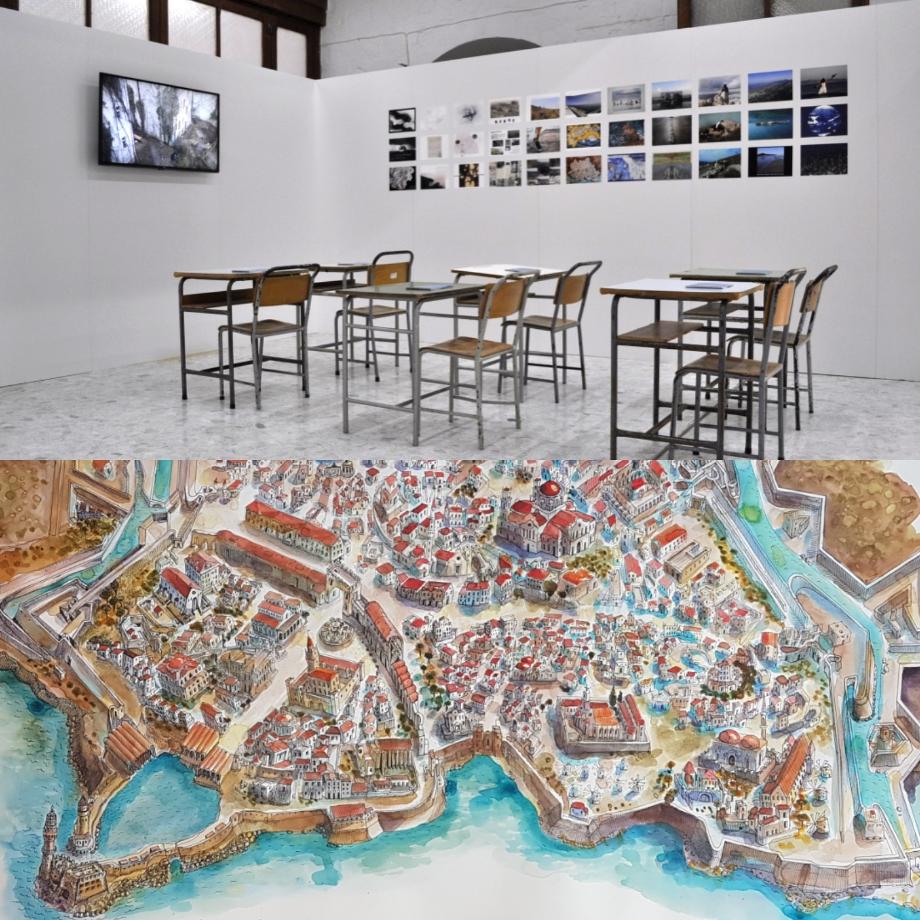 Delighted to be showing selected works from the 'Personal Maps' series, at the wonderful Alexandria Library, Wilmslow Road, Manchester from October until December 2017.

The exhibition is now over, but the works shown can still be seen in the 'Personal Maps' book on the  'Books' page. 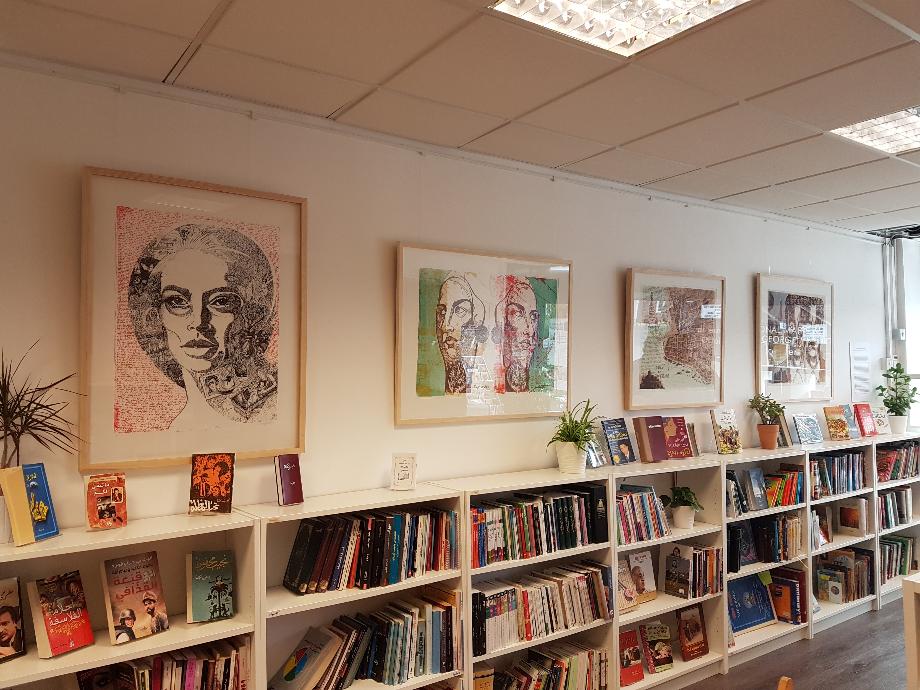 Details of my first curatorial project: 'FOCUS ON IDENTITY' can be seen here:

My research and practical work are beginning to focus on the formation and expression of personal, religious and cultural identities. I have begun to exhibit and comment on the work that I generate in the form of blogs and publications.

'Focus on Identity' is my first curatorial project, which I am hoping to link to my academic work and grant applications, if successful.

My ultimate aim would be to produce a more cohesive body of practical and written work which focuses on the way we map our past and immediate experiences in the works that we generate. My most recent attempt has been 'Personal Maps' a book of limited edition works around the themes of Sense of Place and Identity.

I am interested in how artists acquire, process and disseminate their cultural inheritance. I would like to understand what forces, overt and covert cultural norms and symbols affect artists; and in what ways we form, retain and ‘curate’ inherited histories within our art practices. 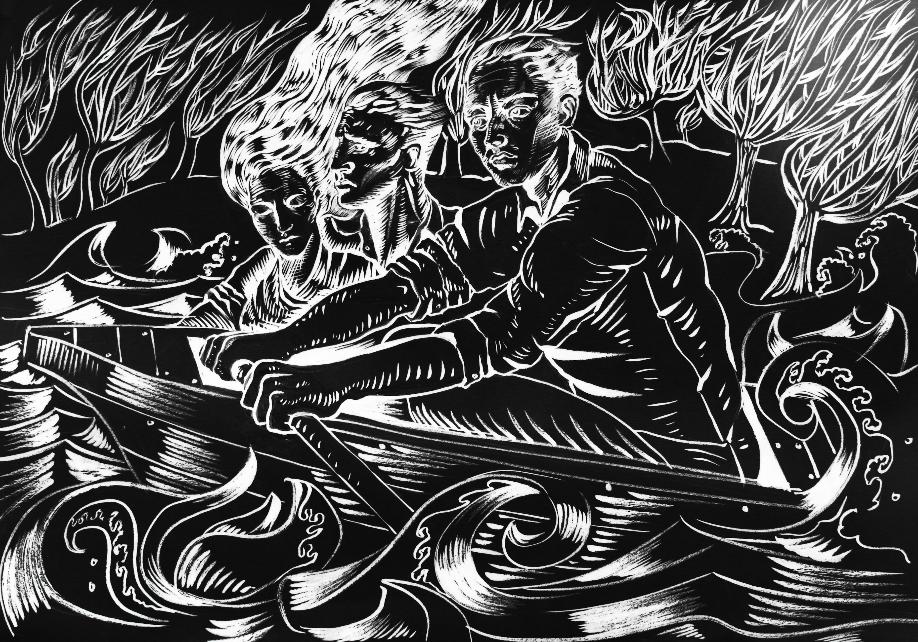 SONGS FROM MY FATHER
Inspired by the beautiful songs of my childhood
420 x 594 mm Screenprint based on original pen and ink drawing Edition of 6.

"You have been selected as a finalist in the "Capturing Human Rights" art contest".

The print selected is 'Songs from my Father'.  Click on the selected image of the print above to find more about Freedom House.org 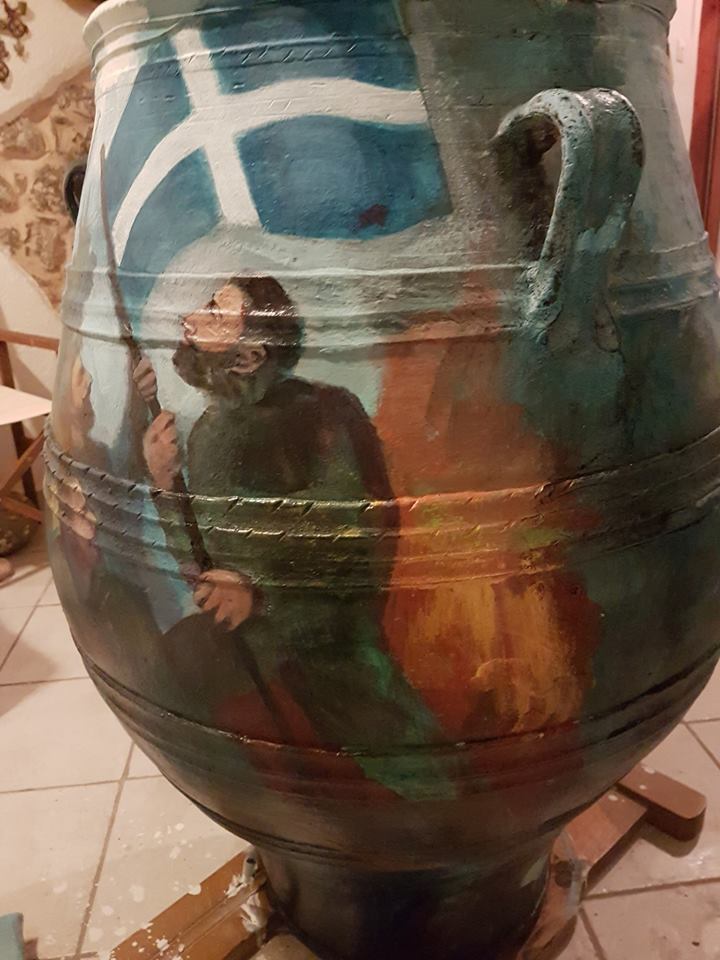 Painting murals and other decorative arts work in Potamies, a little village in Crete to improve the local environment and for the local village memorial. Cliick on the image above to find our more.

Some photographs from the summer of 2016. 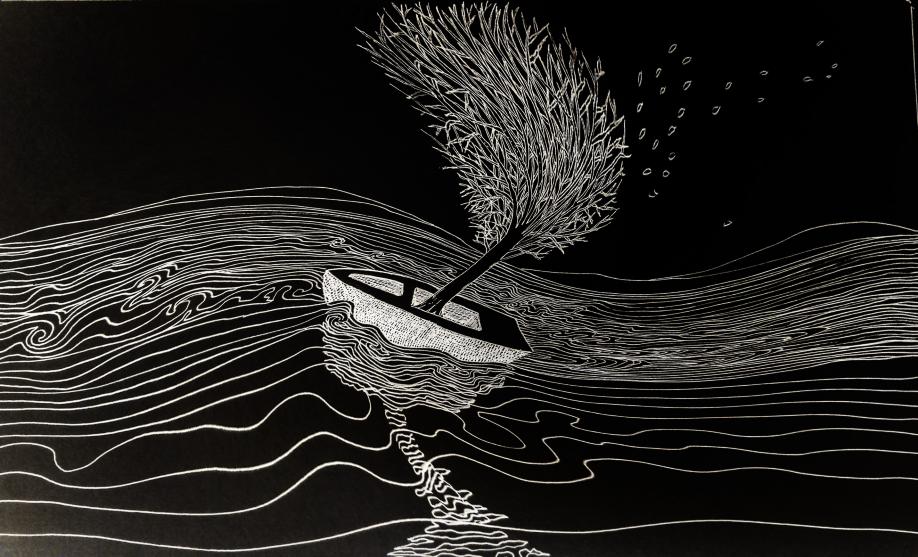 'Little Hope' a digital print is a winner in the Small Print International.

Click on the image of the print above to find out more.